Oscar Wilde’s 1895 comedy The Importance of Being Earnest is about the necessity of being called Ernest, but not actually being Earnest:

Jack and Algernon are typical dandies; they enjoy their independence and do not care one bit about the serious side of life. But when Jack gets engaged to Algernon’s cousin Gwendolyn, things get complicated. Gwendolyn has only fallen in love and agreed to marry Jack because she thinks he is name is Ernest, a name she adores. You see, a long time ago Jack had invented the figure of Ernest, his no-good brother, so that he would have an excuse to come up to town from the country.

Once in the city, he becomes Ernest himself – and that is the version of him that Gwendolyn meets. Now in a hurry to end this secret double-life, Jack rushes to the country. Imagine his surprise when he realizes his ward Cecily, too, is engaged to a man by the name of Ernest, a man whom she believes to be his brother – in truth it is his friend Algernon. When Gwendolyn shows up to visit her fiancée Ernest, the drama (or rather comedy in this case) really begins.

The bpm updated the play and set it in the first half of the 20th century. Check out our trailer here. MEET THE CAST VIDEOS: Director Adriana and Stage Designer Mansi talk about the play here. 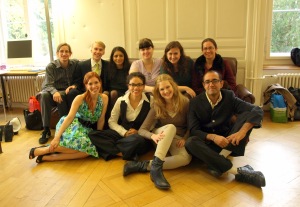 The performance dates for the next production will appear here when they are announced.

The ticket reservations are closed.

Our Newsletter is sent out five times a year and includes all the relevant info about the ongoing production.
Subscribe to it here.

Just like every production, our costume crew is in the process of assembling outfits for all characters, and even sewing some pieces themselves! 👗🧥🥾👕
Our stage crew recently went shopping for all things needed to create a spectacular set! 🌲🌲🌲
While some are reheasing, others are creating things behind the scenes! Here’s a little sneak peek of what our music wizard @andrin.albrecht has been working on 🌲🎶🧙‍♀️
Director @carmen.aeschb’s view of what our Wednesday rehearsals have looked liked over the past few weeks... We’re hoping to get back to small group in-person rehearsals again soon! 🎭
Come join us next Wednesday at this year’s Activity Fair! You can chat to some BPMers and get to know what we are all about and how you can join 🎭🤩
A little #tbt to last year’s rehearsal week! Just about a year ago, we were rehearsing devotedly for last year’s production. Still on the RSS stage, with no mask or social distancing guidelines - oh what a time that was! 😍🐰